What Is the Value of an Age Discrimination Lawsuit? 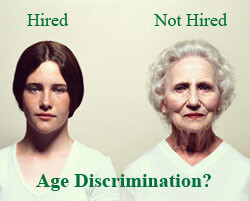 Is it against the law for your employer to discriminate against you for something over which you have no control, like your age? The short answer is Yes. It is unlawful for employers to discriminate against both applicants and employees by race, gender, country of origin, ethnicity, sexual orientation, disability, genetic information, and even age. Discrimination occurs when an employer treats a person under their employment with one or more of the qualities above differently than other employees. So for example, if you are 50 years old, and your employer does not require you to take a training course that your younger coworkers have to take because they believe you simply “won’t get it,” it is considered discrimination.

It is against the law for your employer to discriminate against you simply because of your age if you are 40 years or older. Employers must not make any assumptions about your ability to complete your job based on your age. In the Digital Age, older workers are seen more and more as an anchor rather than a propeller because some employers believe that as technology progresses, only the younger generation can fully understand all the intricacies of the newest devices and software and so they may base employment decisions on age and discriminate against older workers.

If you believe that you have been a victim of age discrimination, you may have the grounds to file a lawsuit against your employer and collect damages – monetary compensation for the distraught that you have suffered as a result of being discriminated against by your employer. Our Los Angeles attorneys have helped many people in such situations. If you and your attorney can prove that it is more likely than not that your employer treated you differently because of your age, you may receive compensation like back pay, front pay, and other benefits that were lost when you became a victim of age discrimination. While it causes great pain to be discriminated against, one question that rings in everyone’s mind is, “How much is the value of an age discrimination lawsuit?” Our Los Angeles attorneys help people who have faced discrimination and are here to help you answer any questions regarding your claim against your employer. Examples of such questions include:

What is Age Discrimination?

It was not so long ago that employers could legally treat hard-working employees in any way they wanted. This behavior put all women and minorities at an extreme disadvantage when seeking employment to support themselves and families, as well as in the workplace. Employers would often overlook women and minorities for jobs, and if they did get the job, they would often be mistreated by both employer and employee: for example, they’d be given the worst assignments and be subject to both physical and verbal harassment. Employers would also discriminate against such things as age, disability, religion and more. Not a great time in America’s history by any stretch of the imagination.

Then in 1964, after many brave women and minorities fought tooth and nail for their rights, Congress passed the Civil Rights Act which protected certain classes of people from any sort of discrimination. Over the years, amendments were added to include more and more people who faced discrimination. One such class that faced constant discrimination were older workers.

It used to be within an employer’s rights to discriminate against aging workers and force them to retire or overlook them when considering employment or promotion. The Age Discrimination Employment Act (ADEA) of 1967 made it unlawful for employers to continue their discrimination against older workers. Examples of age discrimination include such things like the following:

What Is the Average Case Settlement of an Age Discrimination Lawsuit Worth and What Damages Can I Collect?

There are several compensational damages that are available to those employees who file a claim against their employer if they have been subjected to age discrimination and can prove to the courts it was indeed discrimination, under the ADEA. While each case is different in the amount collected, each case normally has certain payments that are allotted to the victim.

Back Pay: If you were laid off or terminated and can prove to the courts that your employer did so because of your age, then you may be entitled to back pay. Back pay offers you your wages that you would have gained up until the day of the trial.

Front Pay: You may also be rewarded the wages that you will continue to lose from the time of the trial and beyond. In order to get front pay, you must show that the wrongful termination will somehow affect your career and earning capacity.

Emotional Distress: Employees who are victim of any kind of discrimination, including age, often experience emotional distress. Under federal law (ADEA), you cannot get compensated for this pain and suffering. However, you may be able to win such damages on the state level, if the state allows for such rewards after an employee proves that they were victim of age discrimination. In order to prove that you suffered emotional distress, your attorney may have a medical expert testify during your trial about your suffering.

Attorney Fees: Under the ADEA, you may be rewarded the fees which your attorney will charge you for their services. This means that none of the damages you were rewarded will be deducted.

Punitive Damages: These are damages which your employer must pay for their blatant disregard for the law of the land.

How to File an Age Discrimination Lawsuit Against Your Employer

If you want to file a lawsuit against your employer for age discrimination, you must first file a charge with one of two government agencies. The federal agency that exists is the Equal Employment Opportunity Commission (EEOC). Each state has its own Fair Employment Practices Agency (FEPA) – the state of California’s FEPA is called the Department of Fair Employment & Housing (DFEH).

When either agency investigates your claim, and they find enough evidence to suspect that you have been discriminated against, you may request a “right-to-sue” letter. It is recommended that you only ask for this letter once you

The California Labor Law Employment Attorneys Group is here to help you get the damages and compensation that you deserve for being a victim of lawless age discrimination. We offer free consultation and the zero-fee guarantee, which is our promise to you that we will use every available resource to your advantage and as well as removing any financial risk from your part. If we do not win your case, you do not pay for our services. If we do win, and the attorney’s fees are not covered, we only charge a small fee on the amount allotted. Our main offices are in Los Angeles but our lawyers take cases from the entire state of California, so no matter where in California you’re located, we can help you. Even if you’re located outside California, we have colleagues in other states that can help you. Give us a call today.

These guys are great they took care of my case fast and without any problems. I definitely recommend them just picked up my check Thanks California Employment Attorneys Group.