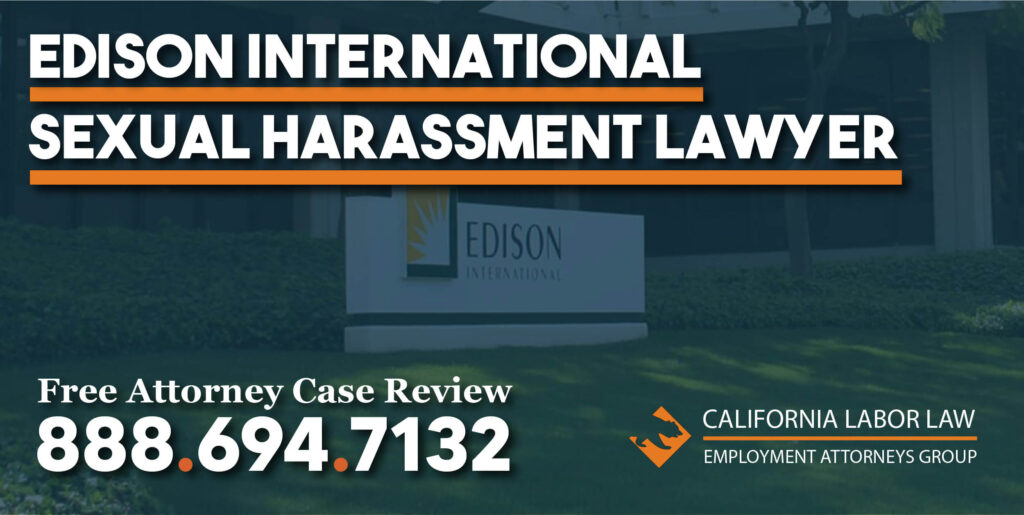 Edison International is a large company with hundreds of workers. It is highly likely that many workers will simply let harassment go unchecked because there is not a large chance that they will be taken seriously. We believe that all workers should be treated fairly and appropriately, and no worker should be sexually harassed. If you have been mistreated at work, our Edison International sexual harassment lawyers in Los Angeles will help you. Call our law group, the California Labor Law Employment Attorneys Group, for help moving forward with your claim.

There are various laws that prevent sexual harassment in the workplace. They primarily fall under anti-discrimination laws. The most common and widespread is the Civil Rights Act of 1964, which protects individuals from unwanted sexual advances, visual or verbal conduct or physical conduct of a sexual nature, and more. The acts must be based on sex, but do not need to be based in sexual desire, nor does there need to be any presence of sexual desire. It can be based on perceived or actual sex, childbirth, gender, orientation, and more.

What are forms of sexual harassment?

You may be a victim of sexual harassment in the following ways:

These forms of sexual assault can happen to anyone, male or female, young or old. It is important that you find a California sexual harassment attorney for Edison International employees if you were treated in such a way.

Sexual harassment is generally split into two categories. They are:

How do I file a Sexual Harassment Lawsuit Against Edison International?

Filing sexual harassment claim against Edison International can be difficult. If you have not done so, you should look at the workplace sexual harassment policy. The more familiar you are with the policy, the better prepared you will be to handle potential situations. You can also retroactively decide if an action were over the line or if it constituted sexual harassment.

Upon being mistreated or harassed, you should go to your boss or to your HR department to make a complaint about the treatment. You can put this complaint in writing as well so there is a printable copy and record of the meeting. However, HR is going to protect the company, and your boss may not want to stir any trouble, especially if the alleged individual is a supervisor of some kind.

In addition to the complaint you put in writing for your boss or for HR, you should keep your own journal or list of what happened. This journal can include the dates of the incidents, the times they happened, where on company grounds they occurred, and who was involved.

What will really benefit your case is concrete proof, such as video evidence from surveillance footage, audio evidence from recordings, photographs of harassment or copies of messages, and more. If you can acquire it, you should make copies so that it is not lost or destroyed.

You should request support from your coworkers, as additional perspectives will help your claim. They can give you their statements and testimonies but sadly, many may refrain from doing so. They could face retaliation if they help you.

In some scenarios, such as those where you were sexually assaulted, you should go to the doctor for medical treatment and hold on to all the proof you get from the visit.

What is the statute of limitations file a sexual harassment claim against Edison International?

The statute of limitations is the time limit you have to sue after you have been wronged, hurt, or harassed. There are different statutes for different torts. Employment claims for sexual harassment must be filed within 1 year of the occurrence if you are going through a California-run agency, the Department of Fair Employment and Housing. However, the time limit is reduced to 6 months if you are going through a Federal agency, the Equal Employment Opportunity Commission.

It is important that you follow the statute of limitations, as failure to adhere to it will cause you to lose out on the chance to receive compensation. You can speak with a workplace sexual harassment lawyer to determine the exact amount of time on your claim. Often, individuals do not know what the statute of limitations is or how much longer remains before they will be ineligible to sue.

Don’t hesitate to contact an Edison International sexual harassment lawyer if you want to ensure that you are acting within the appropriate amount of time. We will make sure your evidence is preserved and everything is submitted on deadline.

What can I win if I sue Edison International for sexual harassment?

An Edison International sexual harassment lawsuit can result in a large settlement or verdict. You should be properly compensated if you were targeted or harassed, and the perpetrator should not walk away without owing anything, whether it’s monetary compensation or jail time. We will strive to ensure that you are fairly paid from the incident.

You may be able to receive the following damages:

With the help of an Edison International workplace sexual harassment attorney, you will be well on your way to being fairly compensated for the damages you suffered over the course of the mistreatment.

If you are in need of an Edison International sexual assault lawyer, contact the California Labor Law Employment Attorneys Group today. We are known for our high rate of success and our highly rated team of lawyers. Our aggressive attorneys are willing to go to court to defend your rights in front of a judge and jury, and our reviews speak for themselves. We will always place your safety and case above all else.

Call our law offices to set up a free legal consultation. All consultations are totally private, and none of your private details will be shared elsewhere. We will help you understand the nuances of the case and what you can expect out of the legal process. If you wish to hire us to represent you, we will also ensure that you do not pay us any money until and unless we win. The fees will come from the settlement or verdict we bring you. If we lose, we get paid nothing. Either way, your finances will remain untouched.