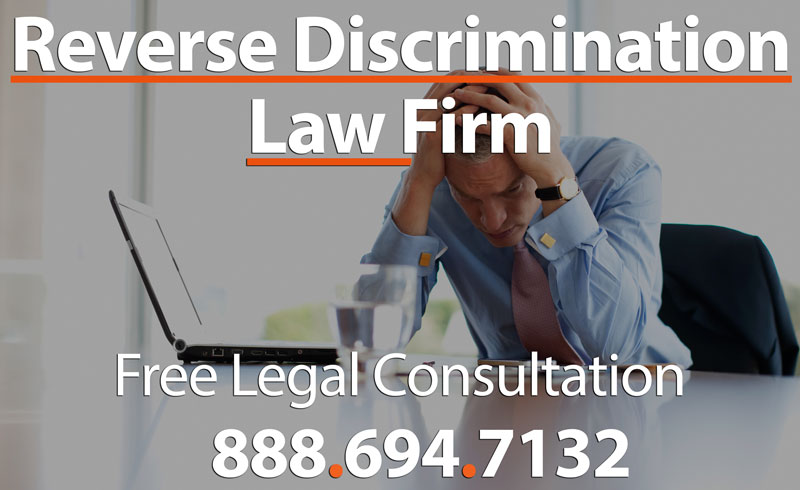 Employers have to consider two things when making employee-based decisions: an employee’s qualifications for the job, and the employee’s ability to perform the essential job functions – those tasks that make that job necessary and why it exists in the first place. If your employer uses things like your race, age, sex against you, and you belong to a majority group (such as white males), you may have the grounds to file a lawsuit against your employer for discrimination – the vernacular among the majority groups being “reverse discrimination.” The California Labor Law Employment Attorneys Group are lawyers in Los Angeles that can provide you with your reverse discrimination lawyer to help you get the compensatory damages to which you may be entitled.

Race discrimination occurs when a disadvantaged group is discriminated against because of their race, color, and physical characteristics that are associated with a certain race (like the color of their skin, the texture of their hair, facial features, and other such things). The term “reverse discrimination” refers to a kind of discrimination which may occur in the workplace wherein members of an advantaged group or majority (such as white males) are discriminated against because of the color of their skin, gender, age, or other protected characteristics that are normally protected under anti-discrimination laws. The term “reverse discrimination” is also often used in a negative connotation by members of that race (such as white males) to describe programs that are meant to help advance members of a disadvantaged and address inequality in the workplace, like affirmative action.

The anti-discrimination laws that exist were signed into law in order to protect and prevent discrimination against minorities and other groups that were (and are) historically disadvantaged and denied many opportunities in the workplace, there exists some notion that these laws do not protect those members of majorities. But the truth of the matter is that these laws make it unlawful for employers to do all forms of discrimination. Employers cannot discriminate against protected characteristics, including those characteristics that are associated with a majority group.

The term, then, “reverse discrimination” normally arises when employees describe the kinds of cases where members of a majority group are claiming that they were discriminated against on the basis of their race, age, gender, and other such protected characteristics.

The California Labor Law Employment Attorneys Group’s employee discrimination attorneys help people like you who have suffered from reverse discrimination. We help answer questions that have to do with a person’s next moves and explain their rights. Examples of such questions include:

Here are a few things you need to know about reverse discrimination in the workplace, and you.

How Do I Know I’ve Experienced “Reverse Discrimination?”

Federal law does not actually state “reverse discrimination” – when members of a majority and advantaged group are discriminated against – anywhere in its laws. The term is normally brought up when a member of a group that has always had an advantage and is part of the majority (such as a white man) has been discriminated against because of something else that is protected by anti-discrimination laws. Common examples of such cases brought by majority groups can be a white male who is discriminated against in favor of a minority, or perhaps a white man suing because a woman got preferential treatment at work because she was a woman. Affirmative action normally serves to give opportunities to those who have been disenfranchised and have disadvantages, but they also may get too close to the sun and run the risk of breaking discrimination laws despite their historic justifications.

Below are a few examples of what “reverse discrimination” may look like:

What Does the Law Say About “Reverse Discrimination?”

It is not easy for the courts to decide on out-of-the-ordinary discrimination cases, and reverse discrimination is among them. Under Title VII of the Civil Rights Act of 1964, employers are prohibited from discriminating against things like race, sex, religion, national origin, sexual orientation, and other such things, regardless of who the victim is. Under Title VII, employers cannot create policies or programs that would lead to disparate impacts on employees. Disparate impacts happen when a policy that is meant to be neutral affects only individual members of a group.

Can I Sue My Employer for Reverse Discrimination?

Since it is reverse discrimination, is there a different procedure that you must follow in order to file a lawsuit? No. You use the same procedure as any other person who files a discrimination lawsuit.

In order to file a claim against your employer, you must first file a charge with an employment government agency. There are two available, the federal and state agencies: the Equal Employment Opportunity Commission (EEOC) and the state of California’s Department of Fair Employment & Housing (DFEH), respectively.

Both agencies have a work-sharing agreement, and this basically means that when you file a charge with one agency, an identical copy of that charge is sent to the other agency. This is known as dual filing and serves to protect your rights under both state and federal laws that exist to prevent discrimination. Under the EEOC, you have 180 days to file the charge from the day you last received the discrimination. This deadline can be extended if both federal and state laws protect from discrimination.

Luckily, California has its own set of anti-discrimination laws, and so the deadline is extended to 300 calendar days to file with the DFEH. The DFEH is the state agency and protects you just as equally as the federal agency.

Once they launch an investigation and conclude that it was likely that your employer violated your rights, you may request the “right-to-sue” letter. It is recommended that you only request this letter once you are ready to take your employer to court because you only have 90 days to take action once you receive the letter! An employment lawyer should help you get all of your ducks (and evidence) in order.

The California Labor Law Employment Attorneys Group is your law firm to sue employers in Los Angeles here to assure that you get the maximum amount of damages that are available to you. We offer free consultation and a zero-fee guarantee! This means that you will not pay for our services unless we can prove and win your case. There is no financial obligation on your part, and all of the risk is on us. Give us a call today to see how we can represent you! We are attorneys located in Los Angeles.